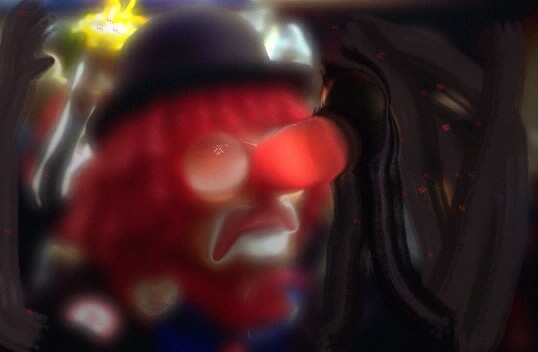 While you sleep, the clowns walk the tightrope of your life story. The faintest gust of wind topples them. They drift down like leaves.

The clowns daub themselves with war paint and don dark suits with silver cuff links and tumble into the sulphurous day.

The clowns juggle appointments, ointments, disappointments. They grin when we insert coins in their wide dead mouths.

Catching a clown is easy. Wait until he’s on his second bottle and then set your crows on him. When you’ve got him, don’t listen to his pleading.

If allowed near a churchyard, the clowns will dig up the dead. They can’t help it! They may bring you a leg, a head, hoping for your approval.

Water burns the clowns. Consequently, they bathe in vodka and drink mercury.

The clowns enjoy a special diet of strawberries, lamb, azaleas and fear. They can’t abide anything pink. Mirrors and loudspeakers confuse them.

Tell me about yourselves, she says to the clowns. But they have nothing to say. The silence stretches and yawns. She sneezes and apologises.

The clowns ride unicycles around the rings of Saturn. Astronomers sulk in their beds. A pie in the face, a supernova. Whatever.

Time stutters, the lights blink. The clowns wear our faces, but we don’t wear theirs. We wear nothing. We’re naked, soft, almost zero.

The clowns visit a bombed-out hotel. The air tastes of ash. They insist on a room with no view. The pulverised concierge wears a stiff smirk.

It is evening. The clowns are ensconced in your cerebellum. The feasting begins soon. The wet grey tables are laden with larval images.

Sometimes, the clowns slip out of synch with the ticking world. Slapstick tricks crack their backs. Mums and dads are sent out of the room.

The show is over. The clowns sit in rows, dabbing at their grease painted faces. The masks dissolve and their skulls show through.

The clowns try crawling down the wall. They want to be Dracula. But they fail. Hours later, rats have conquered the mountain of corpses.

For the clowns, sleep is a rehearsal for death. They keep their eyes open and dream of nothing.

Originally published as a series of tweets.