In May I published part of my work-in-progress collaboration with Viviana Hinojosa. Entitled House of Mirrors, the project is a dialogue between Viviana’s arrestingly strange, beautiful drawings and my writing. What follows is some more recent material we have created.

To see the first part of the project and find out more about it, click here.

Everything is a game to her, even her incarceration. She waits behind the iron door, ready to leap out at anyone who opens it.

She whiles away the time by playing solitaire or chess. The latter is tricky; she has to think first as herself (white) and then as her mirror image (black), then back again, and so on and on until she gets confused or bored or angry with the pointless game.

Her favourite chess piece is the White Queen. She imagines her elegant hands, hesitating on the rusty bolts on the other side of the iron door. Why doesn’t she just unlock it? Well, she’s a queen. Queens don’t do anything much, except the Black Queen, who seeps from shadow to shadow, on a murderous diagonal. 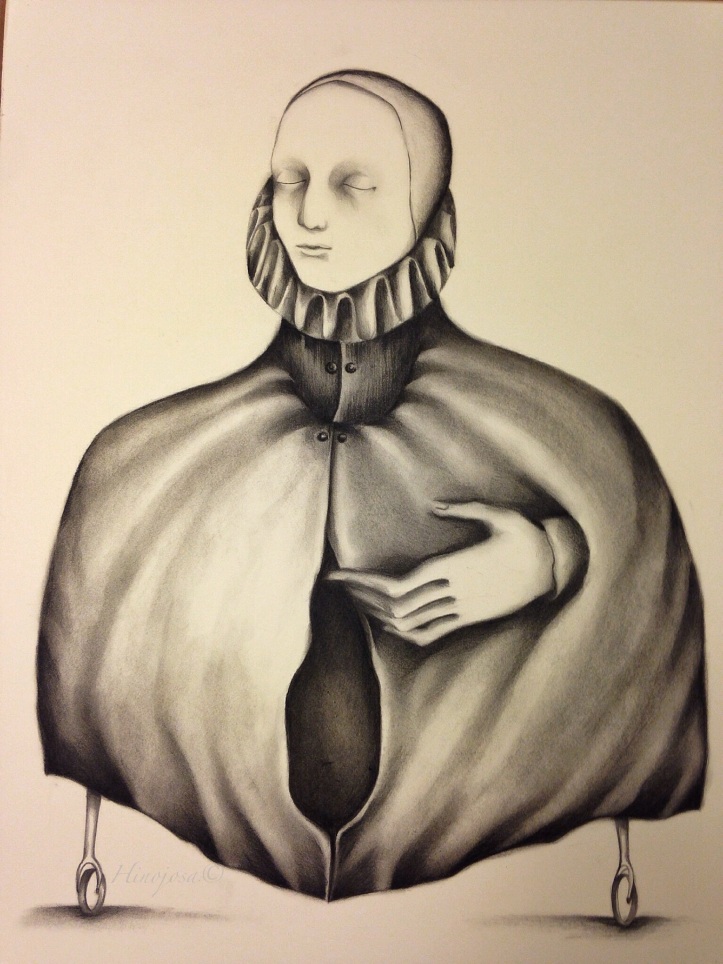 Before the curtains opened: a hand, a door.

More precisely: a piece of scenery, a moveable wooden frame, inside which was a closed door. The observer stood on one side of it, looking initially at his shoes, until he was aware of a foreign object, something that didn’t belong in the general backstage clutter, which made him look at it: a hand on the door.

More precisely: a small hand, maybe a child’s, on the lower left part of the doorframe, fingertips touching the door itself. The observer assumed that the owner of the hand was standing on the other side of the door. He noticed that the fingers weren’t moving. The whole hand was still.

More precisely: a memory of Alice in Wonderland, working backstage, waiting around doing little most nights, often bored, missing her, sometimes allowing himself little erotic daydreams, seeing gigantic tables and playing cards being taken on and brought off again, laughing when a bit of the “EAT ME” sign got rubbed off by accident and read “FAT ME”, sitting sometimes but more often that not standing in the darkness and heat, doing what he was told, lumbering quietly, and one night, one night of many, looking at a small hand on a piece of set and assuming at first it belonged to a child but then not being sure, not knowing if it was real or not. 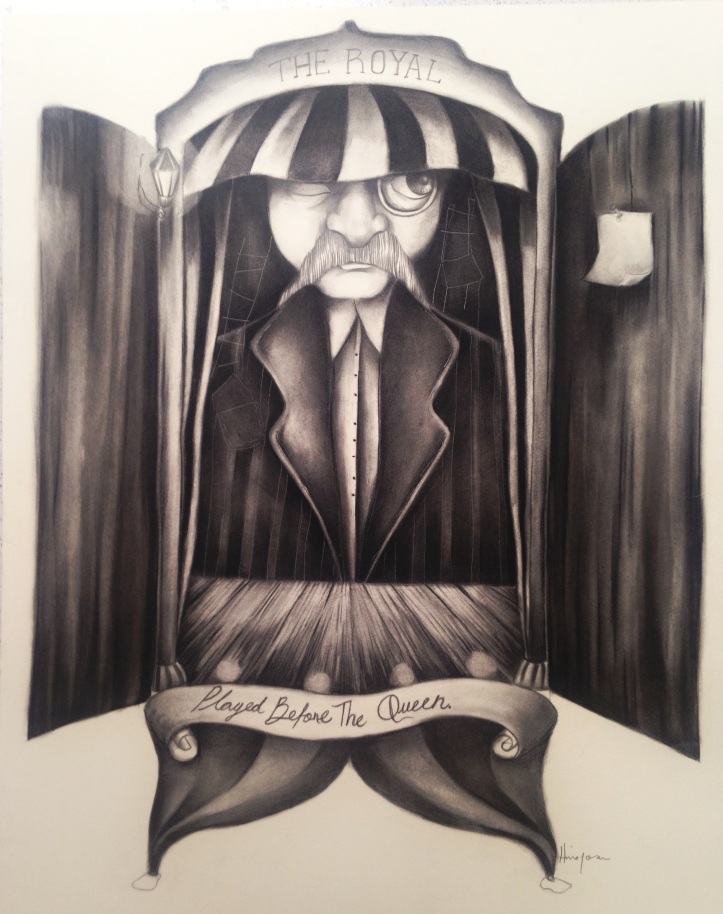 Events played out as expected. Queens were beheaded, palaces bulldozed. Most of us hid behind the riot police and laughed. My dad tried to climb a rope ladder to the moon, but a seagull pecked it in two and he fell to his death. The funeral was a scream: everyone wore fancy dress. I’ve always had a flair for theatricality, don’t you think? You should see me when I fling aside the shower curtain and strut into the searchlights. The crowd adores me. They shriek my name in raptures as they tear down my house of cards.

Don’t you dare call me a queen!

Do you like my wig? It was made from the pubic hair of my enemies. You should have heard them pleading not to be shaved; they sounded like pigs being slaughtered. Very undignified. As you can see, all my makeup is scarlet. It’s a nod to conventional menstrual symbolism. My dress (fabulous, isn’t it!) was designed by Vivienne Westwood. Its most exciting feature is the tiny bomb attached to the whalebone corset; if I try to remove it, I’ll be blown to smithereens! Vivienne always had such a wicked sense of humour. A pity she had to die for it. See that streak of red at the back of my wig? That’s a clump of hers. The shoes? There are no shoes, my dear. I have cloven feet. They’re best left unshod.

Don’t go yet. I’ve so much more to show you, to tell you. It’s lonely here in this trompe l’oeil landscape where everything smells of plasticine and piss. If you’ll pardon my French. And besides, I don’t know how to get back to my palace. That may be it, burning on the hill. Impossible to be sure in this light.

Don’t go. Not just yet. Have I shown you my necklace? The pendant is dear to my heart. Look at it. Go on, I won’t bite! It’s a little glass prison. The wall at the back is a mirror. That girl crawling around inside is called Eve. She did something very bad (I forget what) and will have to stay there forever. She amuses herself by pulling faces at her own reflection. 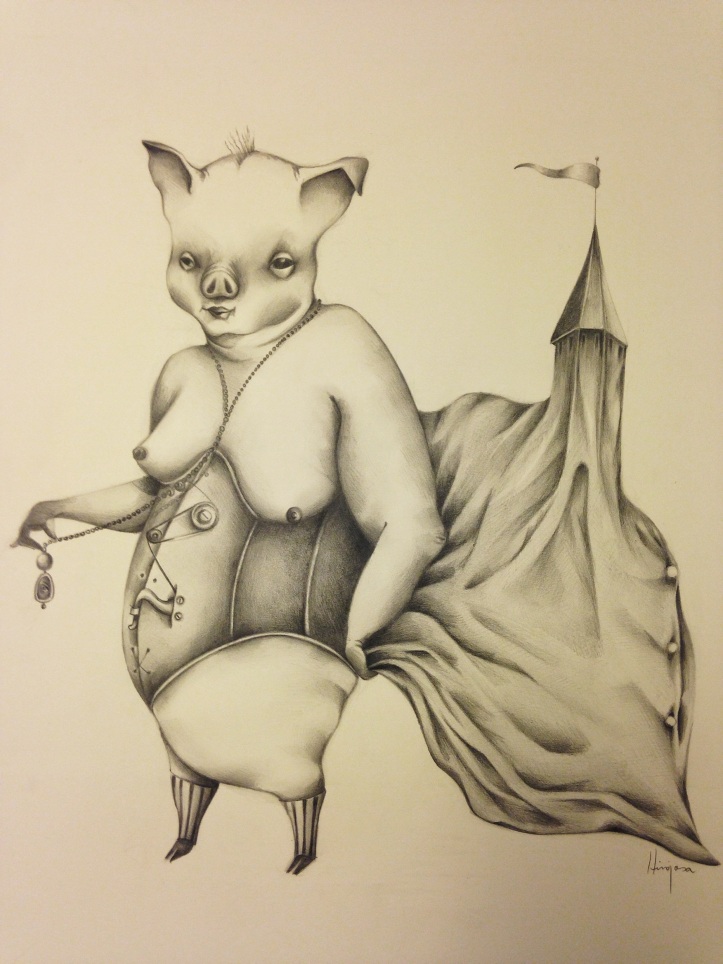 It was the eyes he found most unnerving. They were expressionless and yet somehow malevolent.

He moved on to the next exhibit, which was some sort of machine. It towered over him, its many levers, pulleys, pistons, valves and gears making its purpose impossible to infer. When he looked more closely he noticed that parts of the machine were pink and fleshy, vaguely porcine. One particularly meaty appendage had been branded with what he took to be the name of the contraption: EV3.